Bias is a tender subject. Very few people would like to admit that they are biased in one way or another because in the wider world we often equate bias with prejudice.

However, psychologists have known for some time that bias is part of human nature. Our brains have evolved to use cognitive bias in order to quickly avoid dangerous situations and create strong social groups. For example, in the past gravitating towards people who were more similar to oneself would have increased the likelihood of having relationships where both sides would take care of mutual interests.

Of course, in the 21st century we don’t necessarily want to be controlled by our biological impulses. This is especially true in circumstances where an objective judgement is needed, like a performance review. Paradoxically, however, performance reviews are vulnerable to bias because they’re asking for someone’s judgement, and no matter how objective that person may strive to be they still hold “all kinds of personal quirks and biases, both conscious and not”.

In fact, subjective bias in performance reviews, also known as “the idiosyncratic rater effect”, has a big impact on the way employees are evaluated. Studies have even shown that more than half of any performance rating is dependent on the person actually making the judgement, and not to the individual employee being assessed. As Marcus Buckingham notes, “bad rater = bad data." This is clearly problematic if companies are using a one-sided performance review to award promotions or salary hikes.

Fortunately, bias can be tempered with a combination of strategies.

Being aware of the reality - that we all harbor our own biases - makes it easier to notice when we react in certain ways to people. Companies can empower their managers to do this by holding diversity trainings, through which they can understand not only the prevalence of bias but also the way in which bias works.

Similarly, doing a bias-reduction exercise right before giving (or sharing) a review “primes the cognitive system to be alert for bias."  For example, if taking an instinctive liking or disliking to an employee, managers are able to reflect on their feelings and more easily separate their emotions from their rational judgment.

‍If the person conducting the review has a firm grasp of the performance evaluation’s objectives, this will help keep their personal judgments in check. These aims might be categorized into:

2) stimulating development and progress by consolidating goals, and

3) allocating fair rewards as and where appropriate.

Or, as in the case of Deloitte, reviewers could be provided with questions that keep things simple and to the point: either yes/no questions, or questions like ‘how far do you agree that this person is at risk of low performance?’ These questions invite more practical judgements about that person’s actions than about their character.

Remembering objective criteria not only requires the reviewer to consider and define their criteria, but makes it far more easy for them to give objective answers and to communicate clearly. Companies can even come up with their own metrics which can be extremely useful in making sure the review criteria remain relevant to company values. For example, Google measures “googliness”, which emphasizes passion and drive.

Introducing 360º performance reviews is one of the best ways that companies can offset subjective bias. In a scientific experiment you wouldn’t just draw on one experiment or case study to build a hypothesis - you would compare multiple examples in order to get reliable data. The same goes for review processes: rather than rating employees based on the evaluation of a single manager, you’re much more likely to get a fair representation of an employee based on the judgment of their manager and their peers.

By asking peers for their say you can combat another common issue: in some cases, managers don’t actually spend that much time around their employees and so are not always the best candidate to give an accurate evaluation of that person. In other words, they’re often missing a lot of context. Peer reviews fill in the gaps created by hierarchical differences.

In addition to peer reviewing, creating a panel of reviewers from various backgrounds, outlooks and experience can combat the like-seeks-like effect. For example, making sure your reviewers are gender-balanced, have different ages and nationalities, or hold diverse religious beliefs can help employees be reviewed more fairly.

Another useful strategy for monitoring subjective performance reviews is to introduce a second stage of evaluation where the review is assessed by a supervisor, or other managers. This increases the likelihood that the original review will be written with consideration, and incentivizes reviewers to emphasize their use of objective criteria, leaving out any petty details.

Taken together these strategies will help create more fair review processes where managers (and peers) can write fair and honest evaluations. Employees will no longer leave their review talks meetings feeling undervalued, misjudged or confused, meaning that performance reviews can stop being draining and intimidating, and start being useful and illuminating. And companies know this: objective performance review practices are increasing in popularity as the biases of the old system are exposed.

For more information, keep an eye out for our upcoming blog post on how to conduct the ultimate performance review! 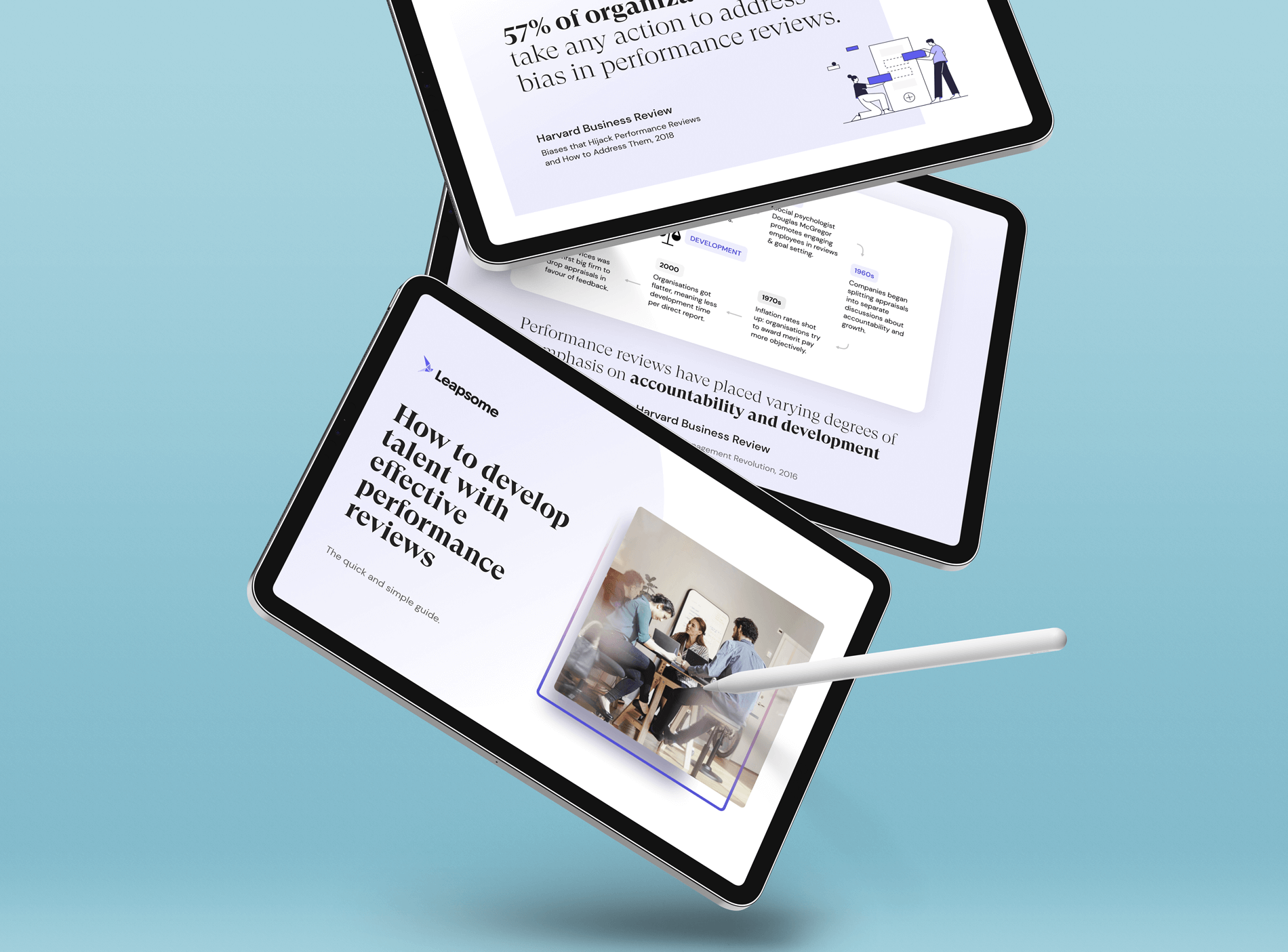 Diving into the Future of Work: 2021 in Review at Leapsome

2021 was no ordinary year. At Leapsome, a lot has changed too. Find out what happened at Leapsome in 2021 and how we dived into the Future of Work.

In this podcast episode, David Hanrahan (CHRO at Eventbrite) tells us about the road to his current role, the future of work, evolving company culture, and more. Listen (or watch) now.

The best companies to work for enhance their people management processes with Leapsome.