What personal resolutions can teach us about professional goals & failure

Whether it’s the end of summer or the beginning of the calendar year, everyone knows that back-to-school feeling. “New year, new me,” you say to yourself. “I’m not going to make the mistakes I made before.” And when you see friends renewing gym memberships and downloading health apps, you can’t help but think this will be the moment you finally kickstart a new habit. Wouldn’t that be great?

The trouble is that the “fresh start” feeling doesn’t last: to take one example, 92% of New Year's resolutions begin to look somewhat neglected by the start of February (maybe you were even one of them). Whether it’s promising oneself to start meditating or get a promotion, personal goals often carry implications of over-ambition and failure before they’ve even gotten underway.

Yet when so many of us are frustrated so regularly, it’s worth asking: “What can I learn from this collective experience of falling short of goals?” Could our approach to personal goals inform the way we set and carry out goals in the workplace? We looked at some of the main reasons personal goals fail, and how you can avoid those same mistakes in your professional goal-setting.

Let’s say you want to train for a marathon this year. In preparing for your first run, you find an old pair of trainers you haven’t worn for a while and put them on – they no longer fit very well but you just want to get started. However, as time goes on you begin to dread the thought of putting on those old, uncomfortable trainers and eventually stop going on runs altogether. ‍

Lesson for the workplace: Don’t rush into your goals without thinking about potential roadblocks. For example, if you want your team to start holding regular 1:1 meetings this year, have you made sure there are enough meeting rooms available for that purpose? You won’t be able to focus on the goal itself until you’ve removed basic obstacles around it: so make sure you assess the landscape before getting started.

Most people setting personal targets seem to think of themselves as light switches, not human beings, leaving no space for acclimatization when setting goals. They phrase targets in absolute terms: “quit smoking or else”. But humans are creatures of habit. We need time to adjust to new things, both psychologically and physically. So rather than overwhelming ourselves with immediate goals, it makes more sense to build up to what we want to achieve. ‍

Lesson for the workplace: Always set out small first steps on your way to any new goal. You can still make the end objective ambitious, but make sure it’s not the only objective. If you want to triple your revenue this year, for instance, you might begin by holding a budget meeting, or coming up with new product pricing incentives. Splitting your goals into smaller, incremental chunks makes them more manageable in the long run (which is also why so many professionals like to use the OKR (Objectives & Key Results) framework). When you can contemplate the first step without feeling swamped, that’s a good indicator you’re easing in at the right pace.

No one is perfect. Nevertheless, it can be hard to forgive yourself when you falter, especially after a sustained period of hard work. (Another good reason to ease into your goals slowly – your weak moments don’t feel so dramatic in contrast to your achievements.) Some people become so disheartened when they break a long streak that they give up altogether.

This is paradoxical because when we set goals, common sense tells us we’ll probably deviate from them at some point: we’re human after all. Yet when you make those mistakes, you feel discouraged and disappointed, and think, “why did I ever believe I could reach that kind of goal?” You focus too much on the backwards step and not on how far you’ve come. ‍

Lesson for the workplace: One simple thing can help you keep perspective when you stray from the intended course: goal tracking. Platforms like Leapsome give you an objective overview of goal progress so that a 5% shortfall doesn’t translate to 50% demotivation. Using an app also encourages positive goal tracking, where advancements are tracked. You can embody this in person by celebrating those moments when team members get things right. And more generally, maintain a work culture of trust, where employees know they won’t be chastised for having an off week.

Speaking of the freedom to make mistakes, let’s not forget about the importance of accountability. This is particularly relevant to personal resolutions, in that the person setting the goal rarely has an accountability partner. And without accountability, the success of a goal depends solely on willpower… not the most constant human trait. Imagine you set yourself the goal to run every morning. Your alarm goes off early and you lie in bed trying to muster the strength to part with your duvet. But as the minutes pass, you can only think of reasons to stay in bed. No one will know if you don’t go on a run. But if you have a running buddy waiting for you outside, going on that run becomes more significant. ‍

Lesson for the workplace: Setting up a system where you know your progress will be seen is very effective. It doesn’t mean you have to literally achieve your goal alongside someone else achieving the same goal, as with the running analogy. It’s more about having a check-in system: an external perspective on your goals.

Set up regular 1:1s with a colleague, in which you know you can talk openly about your recent achievements. Or you can hold stand-up meetings with your team each morning so that each person has a basic idea of other people’s progress. Bonus: you get to deepen your relationship with whoever you check in with, and increase the transparency of your team overall.

It’s one thing to prepare for goals by addressing roadblocks, but it’s another to get distracted by the planning process. For example, a student resolving to get good grades that year would probably benefit from tidying her desk before she sits down to revise. But if she spends hours color-coding post-it notes, signing up for extracurricular classes, researching learning methods and writing up a meticulous revision schedule, all her energy becomes invested in thinking about the goal rather than acting on it. ‍

Lesson for the workplace: As goal expert Roger Longden advises: don’t worry too much about setting the perfect goal. Trying to engineer every aspect of the goal won’t make you feel more in control; it will just lead to more exasperation in those moments where things inevitably don’t go to plan. Trust in your ability to learn and adapt as you go.

Some professionals might find it daunting to launch a new goal without holding ten meetings to discuss every aspect of it first. But in reality, keeping the planning phase short minimizes pressure and leaves more room for unexpected (i.e. creative) thinking.

Too often, our resolutions are doomed to fail because we don’t actually believe in them that much. It’s hard to stick to a new diet if you just read about it in a magazine. But if you think of how that same diet alleviates a chronic pain you’ve had for years; or how it educates your children to eat healthily too, it becomes a no-brainer. The key is to make the reason personal: to come up with a ‘why’ that resonates with you. ‍

Lesson for the workplace: It can be especially difficult to remember the personal ‘why’s in a work setting because you’re operating within an organism larger than yourself, so there are often more degrees of separation between yourself and the overarching goal than in your personal life. But working for the sake of pleasing your boss or to keep a reputation as a productive employee – what we would call extrinsic, rather than intrinsic motivations – won’t drive you when it really matters.

We recommend two things in this case: firstly, use a goal tree to see how your goals contribute to the overall mission of the company. Secondly, make sure to really understand your company mission so that you can find aspects of it that resonate most with you on a personal level. Coming up with a deep ‘why’ for each goal will make it easier to pull through when the going gets tough.

In short, professional goals can fall prey to many of the same caveats that personal resolutions do. Fortunately, it’s often not too difficult to find teammates, managers or other support systems to help you with your goal progress in the workplace. And once you’ve mastered the art of keeping long-term goals, maybe you can even transfer the knowledge you learn from your professional goals back to your personal life!

Looking for a tool to help with your aspirations at work? Check out the goal management capabilities we offer with Leapsome to guide your  company, team-level or individual goals & OKRs. 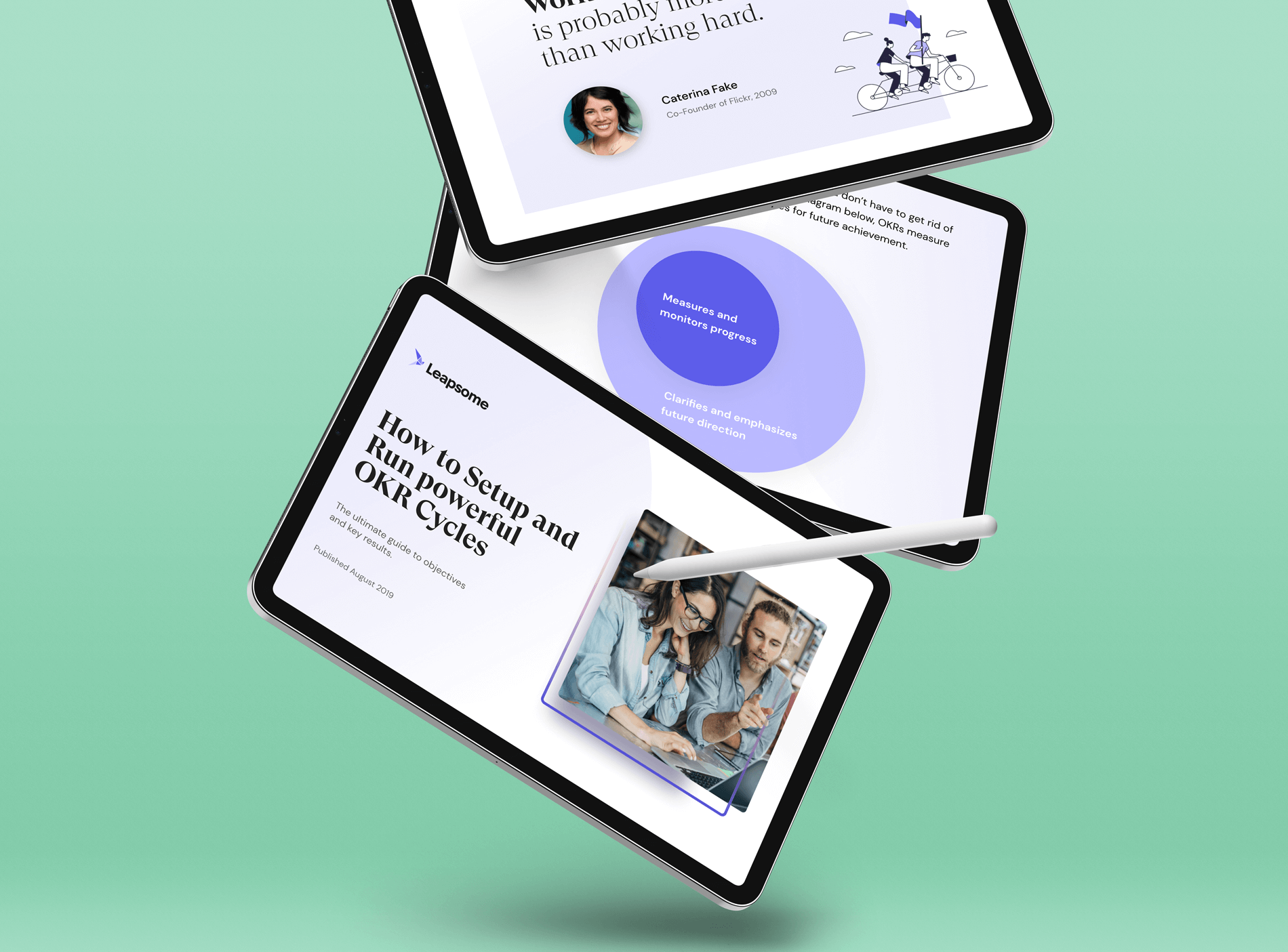 Mid-year reviews are important for happy employees and thriving teams. Learn our top tips, the steps to follow & great questions to ask.

Performance management systems: a guide to what, why & how

Performance Management Systems are vital for growth-minded organizations. Discover what they can do for your team — and how!